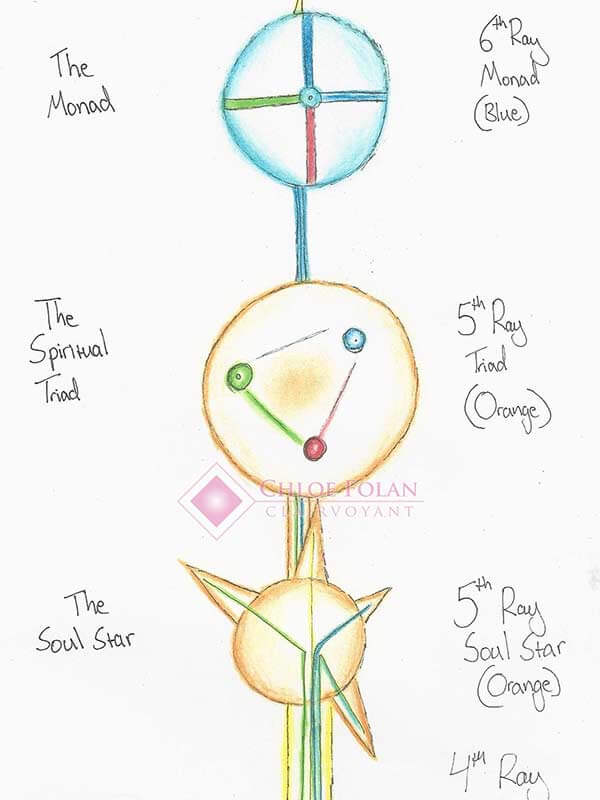 Stages of Building the Rainbow Bridge

Opening remarks: The terms and descriptions used in these blogs and my book have no connection to any pre-existing fundamental esoteric turns of phrase. While there are some overlaps and similarities, there are differences as well.

To prevent any confusion with any pre-existing terms you might have used or been taught, I’m adding a summary and glossary to start the explanation process.

Aura layers 1-7: the seven main layers of the human aura.

Soul star: located above the human head in the third layer of the aura in the early stages of the Rainbow Bridge Building process.

The aura layers of the triad points are as follows:

The monad is located above the triad energy centre in the seventh layer of the aura. This centre contains the monadic threads of love (indigo), activity (green), and will (red). As we work through the stages of building the Rainbow Bridge, these monadic threads link with and through the triad points, soul star, heart centre petals, and link up with the lower portion of the Rainbow Bridge threads.

The ray path is the self-contained sphere of energy located above the monadic energy centre. This centre contains the original contracts in relation to the person’s service and path.

The heart centre petals unfold as the Rainbow Bridge threads weave and thicken, which prompts the petals to unfold in a sequenced rhythm governed by the person’s ray makeup.

In the ray makeup, the person’s personality ray, soul ray, triad ray, monadic ray, and potential ray path are all taken into account:

The Solar Angel is the higher self and is composed of the energy centres that exist outside the human body:

The Rainbow Bridge techniques are also known as The Soul Star Clearing techniques. This technique was developed by the late Josephine and Norman Stevens.

Summary of the State of Building the Rainbow Bridge

There are ten stages that it is possible to reach at this point in time in humanity’s development and evolutionary potential. The last two stages, however, are vague, and I have no case studies for them.

Soul-to-head thread: This thread comes down from the soul star via the central channel and anchors into our head. The tiny, thin beginnings of the central channel now start to form. This happens at the physical birth of a baby when the first breath is taken. This starts to stimulate the three physical-plane petals in the heart centre, which open one at a time. Most often, this opening takes the person’s whole life to achieve, or at least it takes the whole of the adult life to reach this point without a technique that removes and heals the internal and external patterns.

Soul-to-heart thread: the second soul thread comes down from soul star and anchors into the heart. This triggers the three astral-plane petals in the heart centre into opening one at a time.

When the two soul threads (head and heart) are anchored and six heart centre petals open, this marks being fully built to the soul star point or energy centre.

Most adults on the planet have between three to five heart centre petals open, with the soul to head thread fully built, and a partly built soul to heart thread. Most adults look like this to me until deeper work is done to start removing external and internal patterns. Removal, or resolution, of external and internal patterns is what builds the light body and causes the process of Antahkarana thread weaving and heart centre petal opening to speed up.

Until they start removing external and internal patterns, most people have reached only the first stage of Rainbow Bridge building. They are stuck there and can only struggle to reach the second stage.

Now the personality service thread starts weaving up from the solar plexus, up through the central channel, and up to the soul star, where it links with the abstract mind point in the triad energy centre, which is the energy centre above the soul star.

Basically, a proper reduction in internal and external patterns causes the threads to weave and the heart petals to open in a sequenced rhythm. I have found that the Rainbow Bridge technique is a flawless technique for removing internal and external patterns. Without the Rainbow Bridge techniques, people would remain stuck just short of properly completing Stage 2.

I have seen that other techniques have helped some people reach Stage 3 or come near to Stage 4, but then they get stuck there, too. When I check or ask about this, I learn that it has usually taken the person fifteen to twenty years of repeated use of other esoteric techniques to get to Stage 3 or near Stage 4 of building the Rainbow Bridge.

The personality love thread now starts to complete itself. It starts where the soul-to-heart thread is anchored. (Please see the Five Threads document, to be released in my next blog, for a detailed explanation of how this thread weaves.) Basically, this thread is the first monadic thread to weave from the heart centre point, to the triad son of mind point, to link with the monadic love-wisdom thread, and then back down to earth star.

There are no external patterns left at this point if the Rainbow Bridge Techniques continue to be used to keep the external vehicles clear. From this point on, it is mainly internal patterns that are being refined and broken down.

The personality knowledge thread now starts to weave. (Please see the Five Threads document for a detailed explanation.) The weaving proceeds from the trigeminal nerve in the brain, through the soul star, then through the lower mind point in the triad to the monad and the will thread in the monad up to the ray path.

This triggers the opening of the the final four mystery petals in the heart. (Please refer to the Heart Centre Petals Transformed document, to be released in my next blog, for a detailed explanation of the sequence of petal opening.)

The internal patterns have been greatly reduced and refined at this point. Five threads are now woven. The service thread still needs to be completed. This weaving produces a five-rayed soul star above the person’s head. The triad and the monad have become fused. The twelve heart-centre petals are now open, plus four inner revealed petals of monadic force. This signals that the person has completed Stage 5 or built to the ray path.

All the energy centres from base to crown now go silver, one by one, but not in any particular order, though the base centre usually goes silver first. Original trauma points and genetic memory are being healed. All previous, unresolved karma or karmic debts are being healed. The ray path starts to be grounded as the service thread gets completed.

At the end of Stage 6, all energy centres are silver and the ray path is grounded. The twelve outer heart centre petals now dissolve, leaving the inner four. The ray path encapsulates the whole aura. This resembles a snow globe with the five-rayed soul star still shining brightly above the head like a beacon. The person now starts to live out their original contracts.

As long as the Rainbow Bridge work is kept up, no external patterns and only refined internal pattern work remain.

At this stage, all energy centres go a fiery gold/orange/red colour. Because there are no heavy internal patterns to work on, continued Rainbow Bridge work internally works on refining hormones and natural chemical processes in the human body.

The final four petals can still be seen. The five-rayed soul star still shines above the head. This stage leads to what I call ‘esoteric freedom’. At this point, when it is fully reached, everything that happens to you is fully your choice. Outer circumstances do not dictate your choices. It is important to remember, however, that you do not and cannot control everything that happens to you.

All the energy centres now start to form a black spiral vortex one by one. All other phenomena stay the same. This stage simply shows that the person has the ability to bring in information from the next system, which is shown by the ray path and ray makeup.

As there are no case studies, this step is too vague and is related to the next system.

As there are no case studies, this step is too vague and is related to the next system.

I believe that at this point in human evolution the final two stages cannot be reached. I have not seen anyone beyond Stage 8 and do not think I will observe case studies in my lifetime.

I am aware of no other techniques that will get any person beyond Stages 3 and 4 as quickly, safely, and in a personality-balanced manner as the Rainbow Bridge Techniques. I would like to say that no matter how high the Rainbow Bridge Building stage reached, everyone still has to eat, sleep, wash, pay bills, socialize, etc. I believe I am observing an expansion in consciousness or an enforced evolution process.

Below is a colour plate that illustrates the links between the soul star, the triad, and the monad energy centres. The ray path above the monad is deliberately omitted. I think it is best to include a plate to illustrate some of what can be clairvoyantly observed. This plate shows a Stage 3 builder starting the work of the fourth stage.

Note: This article is an extract from the book, Rainbow Bridge Reading, currently in the process of being edited for publication.