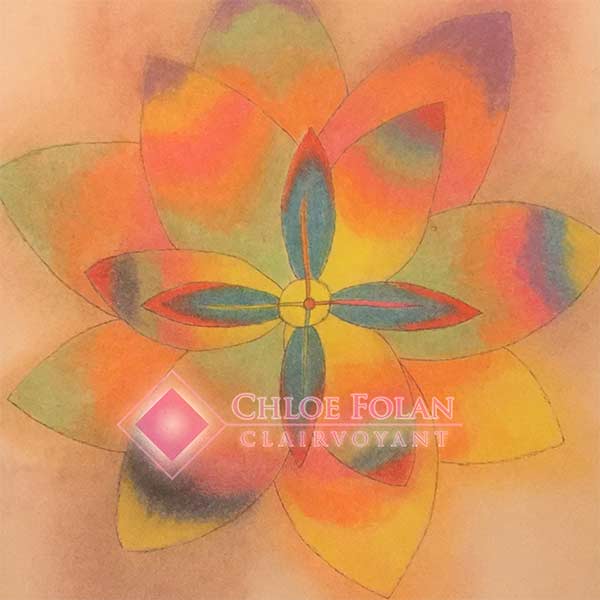 How Heart Centre Petals Are Transformed

This document offers a different clairvoyant perspective on the topics of heart centre petal opening and the development sequence. Please consider the following sequence:

The physical plane petals (the outermost three) that open first are the love, knowledge, and sacrifice petals of the physical plane. These three petals open differently, depending on the personality ray and soul ray.

For example, in one person, the physical plane petals can open in the order of love, knowledge, then sacrifice (indigo ray personality with an orange soul ray). Most of the time, this is true for the first three sets of three petals, i.e., for the physical, emotional (astral), and mental plane petals of the heart centre. The petals always open one at a time. If the personality ray is a secondary or tertiary colour, when it comes to the fourth set (spiritual plane), the predominantly yellow sacrifice (spiritual plane) petal can open first in that tier. This is often because the fourth ray (yellow) is used to condition and prepare the vehicles for the fourth stage of building the Rainbow Bridge.

The General Rhythm of Petal Opening

The general rhythm of opening is as follows:

It is interesting to note that with green personality rays, the soul ray colour dictates which petal colour in each ring opens first. If the green ray personality has a yellow soul ray, then the sacrifice petals will open first in each tier.

There are no red or violet ray personalities in incarnation

The final inner four petals of the soul lotus reflected in the heart centre relate to the final four mysteries relating to the physical, emotional, mental, and spiritual cosmic planes, which also open one at a time. When the inner four petals are revealed this marks the fifth stage in the building of the Rainbow Bridge. This phenomenon in the heart centre gives the appearance that there are sixteen petals, not twelve. The four inner petals are actually transferred monadic force, showing the monadic spark now anchored in the heart centre rather than in the monadic energy centre in the seventh aura layer above the head. At the end of the fifth stage of building the Rainbow Bridge, the triad and monadic energy centres fully fuse and seem to vanish from the aura. What remains of the monadic spark becomes fully anchored in the heart centre.

The final four petals always open in the following order:

Regardless of the person’s ray makeup, these final four petals always open one at a time in that order.

Colours of the Petals of the Heart Centre

These petals are predominantly orange, though other subtle colours in each petal reveal which petal in that ring is being opened. The reason these petals all radiate orange comes from the awareness and lower mental plane activity involved in the person’s evolving on the physical plane. People become more consciously aware of their actions on the physical plane; this is only a dim awareness, however, that gathers and arises as this ring opens. Orange stimulates action, removes congestion, and increases the flow of prana. Note the following variations in colour:

The astral plane petals are predominantly rose, which has a close relation to orange. Orange simulates and cleans out the physical body, which paves the way for rose to come in and aid in healing the astral plane, or second sphere. Rose acts on the nervous system and aids in the lifting of the depression and the healing of extreme emotional polarity states of the personality. Some who have the ability to perceive these petals see them as predominantly indigo rather than rose.

These petals are predominantly green, which relates to the previous solar system of active intelligence (third ray activity). The green ray also relates to the higher mental plane. Green heals and marks the healing of the third sphere, which is the last sphere of the personality.

Thanks to their relation to the fourth sphere of the Buddhic plane, these petals are predominantly yellow. Because of the amount of yellow that comes in with the fourth stage of Rainbow Bridge building, an interesting phenomenon occurs. If the personality ray is a secondary or tertiary colour, it will now go a primary colour, either sixth ray blue or fourth ray yellow (usually the latter). But it does not turn the personality ray into a red ray, as this ray is related to the next system and not enough evolutionary work has been collectively achieved for the red ray to be a personality ray. For example, if an indigo second ray personality reaches the fourth stage, their personality ray will now start to turn fourth ray yellow. This yellow remains even after the fourth stage is complete. This phenomenon has a relationship that is marked by the amount of yellow that comes in with the spiritual plane petals opening.

These petals are mainly all blue in the centre with red tips, though sometimes these colours are seen in reverse with red in the centre and blue tips. The blue represents and links with our solar system and sun (the solar logos). Red derives from the work of the next system (the red circle system). Curiously, the mystery of system blending is revealed in this colour combination.

The total blended colours are red, blue, orange, rose (or Indigo), green, and yellow. Violet is the ray of synthesis for these colours, and indigo is the system we are in.

The following illustration shows the heart centre of a person who has fully completed the fifth stage of Rainbow Bridge building.

Note: This article is an extract from the book, Rainbow Bridge Reading, currently in the process of being edited for publication.